Showing posts from February, 2016
Show all

I was a lapsed gamer, coming from 5e straight from 2e, though I did buy and read 3.5e. Wizards I get, and sorcerers as well. Warlocks are overall new to me, never playing in or running a game with one. While they are present on Eska, they will probably be the least fleshed-out of the options. Wizards, sorcerers and warlocks have long established histories on Eska. Wizards learn their magic either through academies or through a lone master teaching his apprentice. Warlocks gain their power through pacts with powerful entities, while sorcerers come by their magic naturally. I see them more like mutants or super heroes, whose powers manifest as spell like abilities. The elves, especially the mith'edhel have always sought to control wizardly magic. The grey elves run the traditional magical academies. In their usual haughty and arrogant views, the other races are not worthy of admission to their schools. The occasional exceptional applicant does gain admittance, however. The m
Post a Comment
Read more

Bazaar of the Bizarre: Rings that Do Weird Things 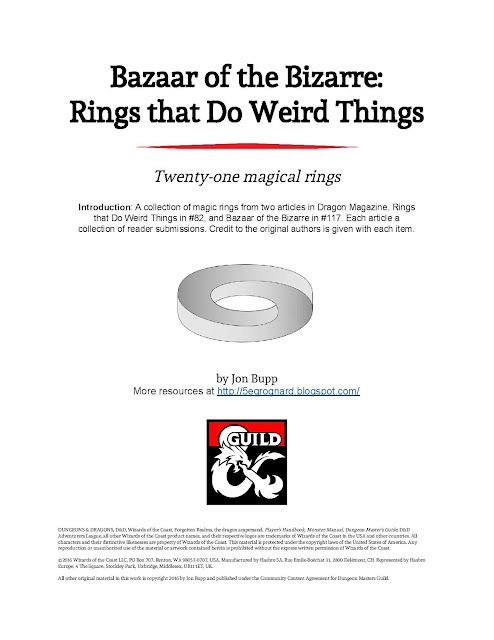 Dragon Magazine #117 was a good one for content for me to work with. In addition to  By Magic Masked , there is also a collection of reader submitted magical rings. I converted a bunch of them over to 5e rules, as well as updating a collection of magical rings from Dragon Magazine #82 that I had previously converted and posted here. I combined the two into my newest DMs Guild Pay What You Want offering, Bazaar of the Bizarre: Rings that Do Weird Things . Twenty-one magical rings to add to your treasure troves! Many thanks to all who have downloaded my two previous collections. In case you missed them, here they are again: Airs of Ages Past  Nine Magical Harps from the Forgotten Realms By Magic Masked  Nine Magical Masks from the Forgotten Realms
Post a Comment
Read more 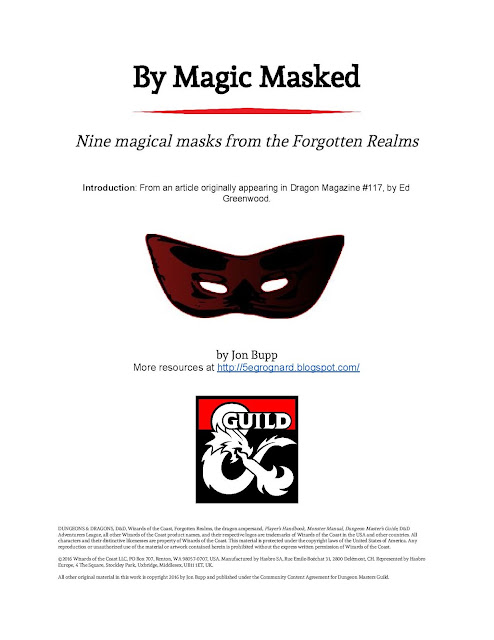 I was pleasantly surprised with the reception of my first DMs Guild Pay What You Want product,  Airs of Ages Past . Thanks to all who have downloaded it, and even bigger thanks to those who threw a couple dollars my way! I'm not in this to make money, any profits will stay in the DMs Guild to purchase products created by others. I've also have dried up on ideas for Eska for the time being, so I'm shifting my focus for a bit. I've now posted my second, By Magic Masked . Following much in the same format as my first, this is from an article that originally appeared in Dragon Magazine #117, and written by Ed Greenwood. It details nine magical masks from the Forgotten Realms.
Post a Comment
Read more

Airs of Ages Past 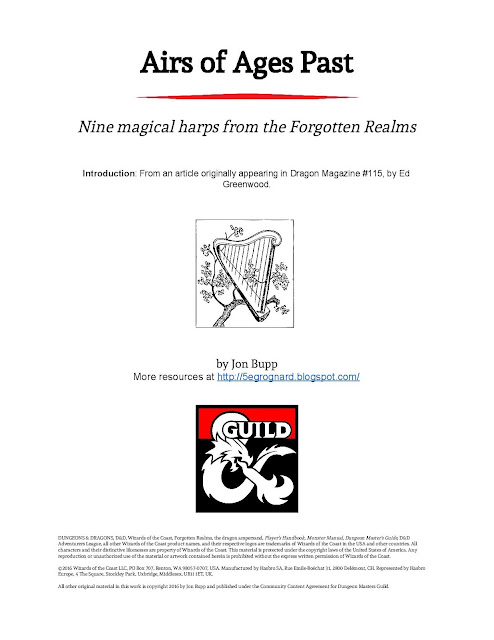 I'm pleased to announce I've jumped into the DMs Guild and have uploaded my first Pay What You Want product, Airs of Ages Past . An article that originally appeared in Dragon Magazine #115, and written by Ed Greenwood, it details nine magical harps from the Forgotten Realms.
Post a Comment
Read more 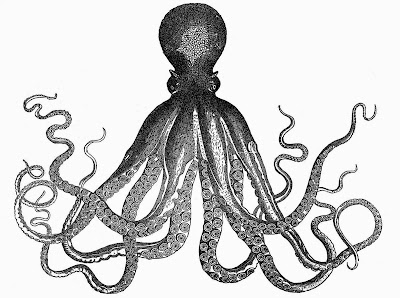 We finally had a chance to sit down and play again, and continued on with our Age of Worms campaign and continued with the Hall of Harsh Reflections . You can read part 1 here . Our party consists of: Lylas, level 6 drow rogue thief Third, level 5 human fighter champion Narcisso, level 6 half elf war domain cleric Dravin, level 5 human circle of the moon druid Jackson, level 6 human fire sorcerer.  A homebrew mashup of a couple origins from Enworld that I'll post later. Kargash, level 5 half orc hunter ranger. They had broken out of the prison and were exploring the Sodden Hold warehouse. A shaft filled with salt water was found, so Dravin wild shaped into a sea turtle, swimming down and finding it lead to a tunnel and a chamber beyond. The group swam down. The chamber had a single pillar, sticking out of water with ladder rungs bolted to the side. A large lever was at the top of the pillar. As Lylas quickly climbed up, a gigantic octopus began attacking the others wad
Post a Comment
Read more
More posts