Showing posts from February, 2015
Show all

February 26, 2015
So when I started the game with my kids, each played one character.  They chose a wizard, cleric, and rogue.  Realizing they needed some muscle I played the dreaded DM PC.  A dwarf barbarian.  To keep things on the up and up, and not to take center stage, I used Charisma and Intelligence as dump stats.  He was basically a lump of dumb muscle.  He made no decisions other than what to hit with his axe (hint: whatever was in front of him).  He talked to no one.  He's become a loved and valued member of the party. As they became better players, I introduced some henchmen, which they each took over, a druid, ranger and a fighter.  Last session, another NPC accompanied the group, giving me two characters to run, and swelling our party ranks to 8.  Too much for me to do, and hard to challenge a group that size. So I told the kids that I wasn't running a character any more.  He would be available for one of them to run, and each could continue to run two characters at a time.  Both
Post a Comment
Read more 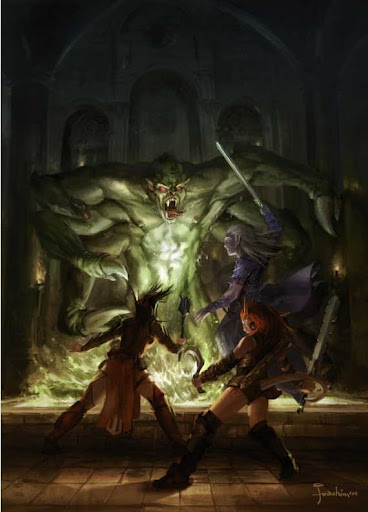 We wrapped up the Three Faces of Evil from the Age of Worms adventure path this weekend. First, I feel like I'm letting some of you down.  I started blogging with the idea of bringing some old AD&D crunch into 5e, and I haven't really been doing much of that lately.  I've been posting mostly play reports.  Well, if I'm letting you down, screw you.  I'm actually playing.  I took over a decade off of playing, so now I'm reveling in it.  I think I'm ahead of myself on game prep right now, so I hope to get some things rolling.  Best laid plans and all. Part 4 Part 3 Part 2 Part 1 Our intrepid adventurers: Daughter has, Lylas, drow elf rogue thief, level 4 Third, human fighter  sentinel , level 3 Son 1, Narcisso, half elf life cleric level 4 Dravin, human moon druid level 3 Son 2, Jackson, human earth wizard, level 4 Kargash, half orc ranger hunter, level 3 Also, 2 NPC's are tagging along Rurik, mountain dwarf totem barbarian, lev
Post a Comment
Read more 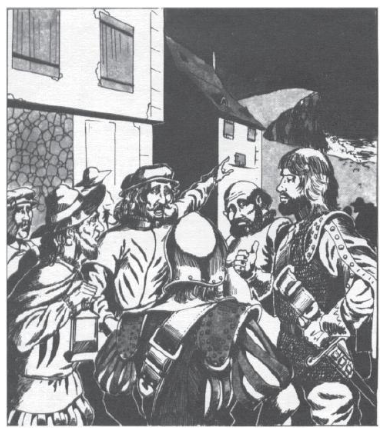 Read more about our adventures in Saltmarsh here . This wasn't really a true session.  This was more just a wrap up of our previous session.  Never even got out dice or character sheets, just sat around the living room discussing things. Our group gathered up all the loot and smuggled goods into the small boat they found in the smuggler's cave and sailed back to Saltmarsh.  The Dockmaster seemed surprised to see them sail into town again, as he helped them sell the last boat they had.  When informed of the goods on board, the Dockmaster told the party of the taxes that would need to be paid on the goods they were bringing to town.  Realizing the hassle of taxes and then selling of the high end silks and brandy in such a backwater town, Garret told the story of the house and the smugglers, and how they were turning in the goods as evidence to the town council, as well as whatever clues and other information they had gathered.  The Dockmaster let them take personal goods
Post a Comment
Read more

I'm in the process of making up spell, magic item and ability cards for my kids to use in our game.  I've noticed that there are a lot of things getting forgotten about because they are just a line on a character sheet.  During this process, I found a new item that I got out of the Fantasy Hero game version of Keep on the Borderlands that one of the characters have that I don't have a 5e write up for.  Lylas the elven rouge in my Age of Worms  group has. Bracer of Bees Uncommon wondrous item, requires attunement This single gold and obsidian honeycomb bracer is in decorated with bees, that seem to subtly move about in and out of the honeycomb .  Using a standard action, you remove and throw the bracer with a range of 15/30.  While in the air the bracer transforms into a swarm of insects (MM pg. 338).  If the insect swarm is killed, the bracer is destroyed.   If you are attuned with the bracer, you can recall the swarm as a bonus action.   You can only
Post a Comment
Read more 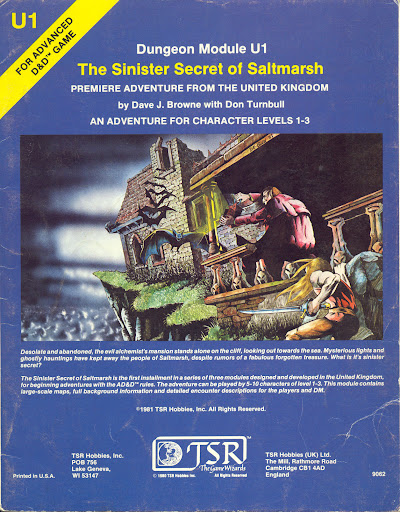 Yes, I know, I haven't posted in awhile, but real life got a bit busier.  More importantly, though, I was prepping and getting ready to start a second group.  My "main" group is my three children.  14 year old daughter, and 9 year old twin boys.  My daughter lives with my ex, and is over every other weekend.  Other activities often coincide with her visits, so we don't always play as often as we like.  My boys have been wanting to do a group with just them for our other weekends. I had started checking out adventure paths, and narrowed it down to a handful.  Left it up to the boys to decide on our theme, and Skull and Shackles won.  In my readings of the AP and some reviews I decided I really didn't like the start of it, and instead decided to go classic and start with the Sinister Secret of Saltmarsh. Our party consists of 4 members.  Each boy is playing two characters, starting at 3rd level.  We've used some backgrounds and subclasses from around the b
Post a Comment
Read more 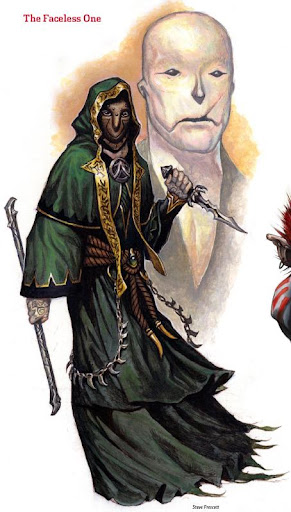 Once again only one session this weekend, but it was a good one.  They finished up the Labyrinth of Vecna this session.  After getting ambushed by the 1st group of kenku last session, they continued through the maze. Part 3 Part 2 Part 1 Our intrepid adventurers: Daughter has, Lylas, drow elf rogue thief, level 4 Third, human fighter  sentinel , level 3 Son 1, Narcisso, half elf life cleric level 4 Dravin, human moon druid level 3 Son 2, Jackson, human earth wizard, level 4 Kargash, half orc ranger hunter, level 3 Also, 2 NPC's are tagging along Rurik, mountain dwarf totem barbarian, level 4 Filch, human necromancer, level 3.  This is Filge from the observatory in the Whispering Cairn.  He surrendered to the party and is tagging along.  The kids, being Harry Potter fans, renamed him. After finding a couple secret doors that were in obvious areas, they were actively searching, and a few that they found kept them away from the one kenku patrol that was t
Post a Comment
Read more Got a great response from Chris Scaturo's post on Lingering Injuries last week, so here is part 2. choice n. the opportunity or power of selecting My daughter is seven, she likes plain pizza.  My boy, he’s five, firmly believes that sausage improves every meal, particularly ones with dough, cheese, and sauce.  My wife, she’s <this line has been redacted>, of course, is lactose intolerant and a vegetarian.  Choosing who’s going to like me on Friday nights is always fun. Me: <Rolls a 20>The Ogre’s huge club crushes you, the protruding metal spike pierces your chain mail and drives deeply into your body.  Wanna you want to do? When I run games I try to let the players have some say in the storytelling process.  Whenever something REALLY BAD (or sometimes just kinda bad) I allow them to invoke the shrug it off rule. Shrug it Off Once per combat (or twice if you’re nuts) you may choose to take no damage from any one attack.  At the end of the comb
Post a Comment
Read more

I jumped on Mythoard's second month a few weeks ago and my package arrived today.  Quite happy with the hoard! Nothing beats the joy of fun mail. Be sure to ask an adult for help.  Scissors are required to open. Behold the wonders within! Two Mythoard folders with some awesome art on the front. Unpainted gnome wizard mini. A button with the same gnome. 2 blazing orange swirled dice, a d4 and a d8. The Powers That Be, a Pits and Perils supplement.  A interesting pantheon of gods. A creature deck.  54 monster cards with some awesome artwork and system neutral info on the backs.  I got the fey, constructs and wildlife deck. 2 card sleeves.  Always useful. A map of Tenkar's Tomb. A cardstock sheet, "The Guns of Brimstone", a preview of old west era firearm rules for DCC RPG, Black Powder, Black Magic. Another cardstock sheet, "The Brimstone Epitaph".  DCC RPG old west "newspaper".  Stories on the front, the flip side being
Post a Comment
Read more
More posts