Showing posts from March, 2016
Show all

With an appearance of warm weather, I bring you a fire themed spell and a magic item that will help keep things toasty. These originally appeared in Dragon Magazine #123 in Arcane Lore by Harold Dolan. Fire Mouth 3rd level evocation (ritual) Casting Time: 1 minute Range: 30 feet Components: V, S, M (a drop of oil, a pinch of sulfur, and one tooth or scale from a red dragon) Duration: Until dispelled When this spell is cast, an object is empowered with an enchanted mouth which suddenly appears and breathes fire when a specific condition is met. When triggered, a thin sheet of flames shoots forth. Each creature in a 15-foot cone must make a Dexterity saving throw. A creature takes 6d6 fire damage on a failed save, or half as much damage on a successful one. The fire ignites any flammable objects in the area that aren’t being worn or carried. If the object you chose has a mouth or something that looks like a mouth (for example: the mouth of a statue) the ma
Post a Comment
Read more 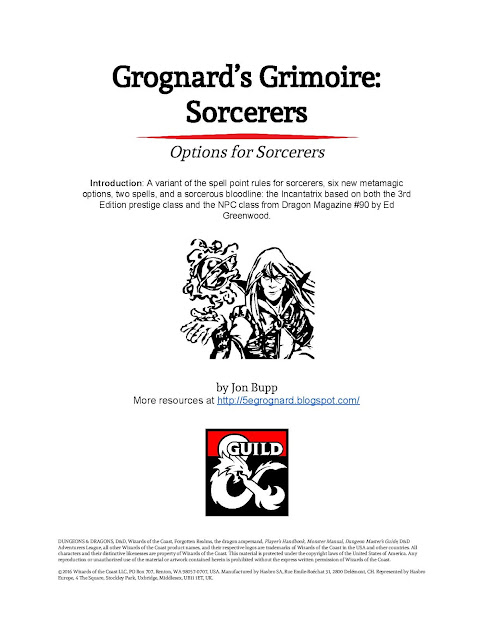 After the comments I received on my Arcane Casters of Eska post, and another session of playtesting I'm quite happy about how the rules work. My sorcerer player was usually quite content to spam cantrips in combat, with the occasional spell thrown out. Last session was a complete flip. He cast a variety of spells, ranging them at different levels as well. He really showed a a lot more flexibility, which is what I was going for. I'm quite proud of the system, so I've packaged it up with some other sorcerer options that I've run here in the past as my first player option on the DM's Guild. Grognard's Grimoire: Sorcerers is now available as a Pay What You Want! I would like to thank all the generous supporters that actually paid for some of my creations! I'm blown away by each and every actual sale. I have taken some of the profit that I made and supported some artists on both the DM's Guild and DriveThruRPG by purchasing some of their art to use
Post a Comment
Read more