Encounter at Blackwall Keep/Tomb of the Lizard King mashup. Part 2

April 24, 2015
Once again, a shorter session.  Busy weekends mixed with nicer spring weather make it hard to sit around the table for hours on end.

Last time, I used the opening from Encounter at Blackwell Keep, with Alustran asking them to escort him to Blackwell Keep to meet with his friend Marzena, the battle mage of the Keep.  The journey took us through the beginning of Tomb of the Lizard King.

Our previous Age of Worms sessions are here.

They left the ruins of Waycome, with the rescued soldier Barto

tagging along, to check out the mad hermit who lived near the swamp.  I ran this adventure years ago, and this part was always one of my favorite encounters.  Stephen DeManis is fun to play.


As they approached his hut, they hear a weird sing song coming from inside.


“They all thinks I’m crazy, so crazy I am;
But I’ll still be here when they ain’t what they am!
They’ll all be taken to Sakatha’s lair,

They entered the hut, introducing themselves.  They questioned him about Sakatha, learning that the ancient lizard king lives!  "I wonder why the snakes in my hair will never comb it?".  Sakatha wants to reclaim his kingdom.  "Where have all the pretty buggies gone?"  Sakatha lives in a temple in the heart of the swamp.  "There are only ugly buggies now."

They continued on their journey, as they got closer to the keep, the 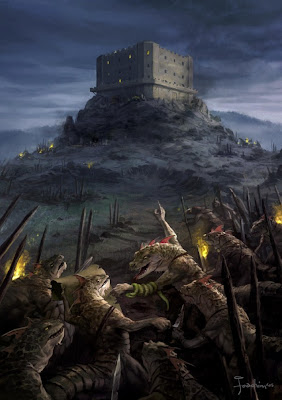 smell of fire and blood, and swarms of flies fill the air.  As they peer over the last hillside, they see that the lizardfolk have laid siege to Blackwell Keep.

The front gate lies broken, and a hasty barricade has been thrown up.  Scattered groups of lizardfolk surround the Keep.  Alustran tells the party that he has a teleportation scroll that he will use to head back to Fort Kyntosh and bring reinforcements.  The party must help the Keep in any way they can, but it will be days to mobilize and march troops to Blackwell.  After Alustran leaves, they decide to make a break for the Keep, but realize in doing so they will have to fight at least one group.  They charge forward, and quickly cut their way through one group, the troops from the Keep cheering them on and hurriedly opening and closing the barricade.

Once inside, they find the ranking sergeant and find out how grim things are.  Only fourteen guards are still alive, and three more still live, but are severely wounded.  Their captain has been killed, and Marzena (the sorceress) and several other guards have been captured and drug into the swamp.  They have about a weeks worth of food, but are running low on arrows.

Dravin heads to the infirmary and casts cure wounds on the soldiers there, adding them back to the ranks.  With Barto, the last survivor of the patrol, that brings them to eighteen soldiers.  Dravin then wild shapes into a blue jay, and flies around the battlefield doing a recon.  There are about forty lizardfolk, as well as a large leader and what appears to be a spellcaster of some sort.  Those two are having a meeting with a group of other lizardfolk.  It's a few hours until nightfall, and they seem to be preparing to attack at dusk.

Returning with his report, Dravin turns back into his human form, while Third (who has the soldier background), takes charge and starts barking out orders and formulating a plan.

First, Lylass is sent on a special mission.  Using her cloak of the elvenkind, she manages to sneak up on the high level lizardfolk meeting, right behind the spellcaster.  Getting a surprise round, she lands a sneak attack with her dagger, and finishes him off with an attack from a second dagger in her left hand.  Winning initiative, she uses her bracer of bees on the leader, and then uses her cunning action to disengage, then runs.  The next round she dashes as her action, and dashes again with her cunning action, making it back and eluding pursuit.  Once in the Keep, she recalls the bees.

With the spellcaster out of the way, and the leader wounded by the stinging insects, the troops morale is boosted.  Third lays the groundwork for the defence from the coming assault.  When the lizardfolk come, they seem to split into two main attacks.  One on the main gate, the others attempting to climb the walls, with some boosting the others up.  The leader holds another squad out of bowshot in reserve.  The party takes up the defence of the gate, leaving the soldiers to man the walls, dropping rocks and firing arrows on the lizardfolk below.

As the lizardfolk approach the main gate, Kargash and Third open it, as Jackson hurls and exploding boulder at the attackers.  (Being an Earth Mage, that is simply a reskinned fireball).  Dravin follows with a thunderwave.  Over half of the gate attackers are already down, as Kargash, Third, Dravin and Lylas charge out and lay waste with melee weapons and spells.  Kargash uses his ranger hordebreaker ability to good effect, while Lylas stays close to Third, making sure to attack engaged foes to bring her sneak attack damage to bear.  They slice through their foes, making good tactical decisions and the right spell choices (and getting good dice rolls as well).

After cutting their way through, they move forwards towards the reserve group, getting close enough for Jackson to use his second 3rd-level spell slot to hurl another exploding boulder at the leader and his group, killing the already wounded leader and most of his group as well.

With that, the remaining lizard men fled into the swamp, the group letting them go to secure the Keep again, the troops cheering on their victory!  The sergeant pleads with the party to head into the swamp to rescue their captured comrades, knowing they don't have long until they are eaten.  None of the soldiers know the swamp, only that their are several different tribes of lizardfolk, but unfortunately they can't tell them apart.  Plans are made to head out in the morning, and hopefully they can find their way through the swamp...

Nothing really to convert this time, their only foe being lizardfolk straight out of the Monster Manual.  The leader and the spellcaster I used NPCs from the back of the MM, the leader being a Thug, and I used the druid for the spellcaster.

Overall I was really impressed with how they handled this this session.  Their seemed to be a focus that has been lacking recently, and they planned out their actions instead of just stumbling their way through.  They did make better use of their full powers, which I helped by getting them organized and familiar with them all better, which I will detail in a future post.
Age of Worms play report