The obsidian giants were an ingenious idea towards the beginning of the Kinslayer Wars. A sort of power armor that an elf could don and fight in, and not give up their immortality. Initially a success, the obsidian giants soon proved to be a failure. They helped win a key early battle, but the horrible truth of their fate caused much sorrow.

I converted the obsidian giants from the wonderful Teratic Tome. I started with the stone giant stats as a framework and tweaked from there. 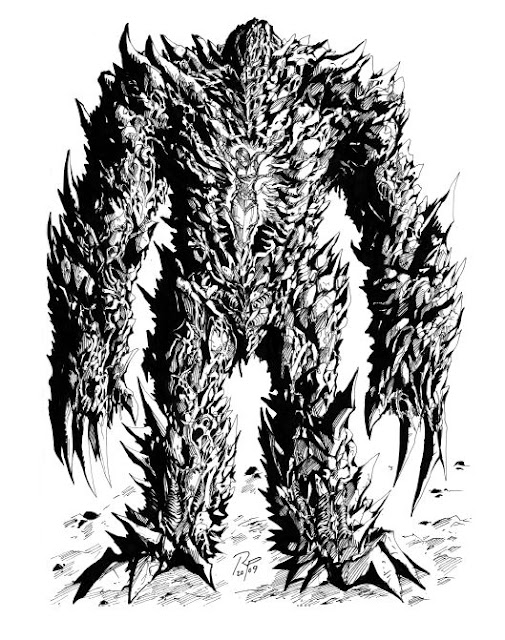 Detect Magic. The obsidian giant can detect magical auras within 60 feet of it. In addition to magic items and spell effects, it can also detect celestials, elementals, fey and fiends, as well as creatures with innate spellcasting or a spellcasting ability.

If a magical creature is slain, such as a celestial, elemental, fey or fiend, as well as creatures with innate spellcasting or a spellcasting ability, the obsidian giant can spend an action to consume its soul, or magical essence to regain hit points. The obsidian giant regains 7 (1d12) hit points for every Challenge Rating level of the creature consumed. The creature consumed is forever dead and cannot be raised or resurrected in any way.

Innate Spellcasting. The obsidian giant is a 15th level spellcaster. Its spellcasting ability is Intelligence (spell save DC 12, +5 to hit with spell attacks). It can innately cast the following spells, requiring no material components:
At Will: firebolt
1/day: fireball, wall of fire, fire shield


Obsidian giants are not true giants; they are elves. Centuries ago, at the beginning of the Kinslayer Wars, a group of gray elves transformed themselves in order to attack the dark elves. Using forbidden magic, they created massive exoskeletons of obsidian that completely encased them; the giant arms are tipped with long, powerful claws of black metal, and the entire structure is covered in barbed spikes and razors of black stone. Within the armor, these gray elves were able to turn the tide of a horrific battle, and saved their realm.

However, in the aftermath, it was discovered that they could not escape the armor - they were bound within, and their magics could not set them free. In the days that followed, as their wizards tried every means they could think of, the elves learned that those trapped within the exoskeletons were starving, and the only sustenance that would satiate them was magic itself, in the form of magic items or magic creatures. By crushing magic items, or slaying enchanted creatures like unicorns, the imprisoned elves could assuage the hunger raging within.

Their people had no choice: they banished these brave warriors, and sent them far away, lest the destroy the very land they sought to defend. Now, years later, these hunger-maddened creatures wander foreign lands, where they are known as obsidian giants. No one knows that under the hard exterior lies a demented gray elf with no memory of its previous life.

Powerful, undiscovered rituals can extract the gray elf from its magical armor; if the armor is destroyed, killing the elf in the process, then the body will be visible.

Should someone extract the elf from its exoskeleton, it will be necessary to cure the insanity which has taken hold. In time, the elf's personality (and true alignment) may be restored.