May 30, 2016
In a new party that we started playing my one son is playing an aasimar sorcerer. The version of the aasimar that we are using is a mixture of write ups from two sources, which I took bits and pieces of each and put them together in a way I liked.

None of the content below is my original work, but taken from

and used by me in my game. I'm just posting this version since I will be referencing it in future play reports. 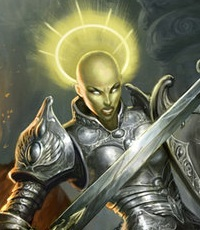 Aasimar
Aasimars are humans with a significant amount of celestial or other good outsider blood in their ancestry. While not always benevolent, aasimars are more inclined toward acts of kindness rather than evil, and they gravitate toward faiths or organizations associated with celestials. Aasimar heritage can lie dormant for generations, only to appear suddenly in the child of two apparently human parents. Most societies interpret aasimar births as good omens, though it must be acknowledged that some aasimars take advantage of the reputation of their kind, brutally subverting the expectations of others with acts of terrifying cruelty or abject venality. “It's always the one you least suspect” is the axiom these evil aasimars live by, and they often lead double lives as upstanding citizens or false heroes, keeping their corruption well hidden. Thankfully, these few are the exception and not the rule.


Aasimars cannot truly be said to have an independent society of their own. As an offshoot of humanity, they adopt the societal norms around them, though most find themselves drawn to those elements of society that work for the redress of injustice and the assuagement of suffering. This sometimes puts them on the wrong side of the law in more tyrannical societies, but aasimars can be careful and cunning when necessary, able to put on a dissembling guise to divert the attention of oppressors elsewhere. While corrupt aasimars may be loners or may establish secret societies to conceal their involvement in crime, righteous aasimars are often found congregating in numbers as part of good-aligned organizations, especially (though not always) churches and religious orders.


Aasimars are most common and most comfortable in human communities. This is especially true of those whose lineage is more distant and who bear only faint marks of their heavenly ancestry. It is unclear why the touch of the celestial is felt so much more strongly in humanity than other races, though it may be that humanity's inherent adaptability and affinity for change is responsible for the evolution of aasimars as a distinct race. Perhaps the endemic racial traits of other races are too deeply bred, too strongly present, and too resistant to change. Whatever dalliances other races may have had with the denizens of the upper planes, the progeny of such couplings are vanishingly rare and have never bred true. However, even if they generally tend toward human societies, aasimars can become comfortable in virtually any environment. They have an easy social grace and are disarmingly personable. They get on well with half-elves, who share a similar not-quite-human marginal status, though their relations are often less cordial with half-orcs, who have no patience for aasimars' overly pretty words and faces. Elven courtiers sometimes dismiss aasimars as unsophisticated, and criticize them for relying on natural charm to overcome faux pas. Perhaps of all the known races, gnomes find aasimars most fascinating, and have an intense appreciation for their varied appearances as well as the mystique surrounding their celestial heritage.


Aasimars are most often of good alignment, though this isn't necessarily universal, and aasimars that have turned their back on righteousness may fall into an unfathomable abyss of depravity. For the most part, however, aasimars favor deities of honor, valor, protection, healing, and refuge, or simple and prosaic faiths of home, community, and family. Some also follow the paths of art, music, and lore, finding truth and wisdom in beauty and learning.


Age. Aasimar age similarly to humans, though many stay looking young for much longer than other humans.


Alignment: Tending to Lawful Good but not restricted to.


Size. Medium. Their size and build is roughly the same as a human's.


Darkvision. Your planar heritage manifests itself as the ability to see in dim like for 60 feet as if it were bright light, and to see in darkness like it was dim light. In darkness, you do lose the ability to distinguish color, seeing the world only in shades of gray.


Celestial Resistance: Aasimar are resistant to cold and electricity damage.


Celestial Legacy: Aasimar know the light cantrip. At level 5 you can cast the aid spell once per day. Wisdom is your spellcasting ability for these spells.


Languages: You can speak, read and write common and Celestial.