June 20, 2015
Time to start the final chapter of the Saltmarsh series of adventures, U3 The Final Enemy.  With the knowledge that the sahuagin were gathering in force practically on their doorstep, the council in Saltmarsh has hired the party yet again, this time to do a reconnaissance in force to the sahuagin lair. Previous sessions can be found here.

Our party consists of 4 members.  Each of my sons is playing two characters, who are 4th level.  We've used some backgrounds and subclasses from around the blogosphere, and I'll be linking them...

Henk.  Half orc raider barbarian with the duelist background.

Faen Firegem.  Half elf pyromancer alchemist with the tinkerer background.

The party was once again joined by Tom and Will Stoudtly, now corporals, and an extra 4 marines.  Oceanus, an aquatic elf fighter that they rescued from the raid on the Sea Ghost has also joined them.  Their bullywug allies send along two full squads, 12 bullywugs and two sergeants.  All told, 25 going on this recon mission.

Also, a small merchant fleet has pulled into Saltmarsh, and the council has taken it upon themselves to hire a crew away from them to crew the Sea Ghost.  Captain Red Lambert would sail the ship to the sahuagin lair, but him and the crew would not be coming ashore. 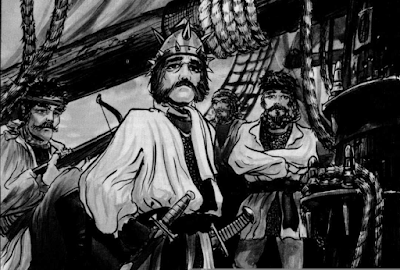 To be honest this was played in two sessions, and the first was awhile ago, so I don't remember all the details.

Captain Red set them ashore and the group made their way to the lair.  The bullywugs with them were quite shocked that the island that the lair was in seemed to have sunk down quite a bit.  Things have definitely changed since they sahuagin had driven them out.

They entered the lair and were immediately set upon by a small guard force.  Hooked nets dropped from the ceiling trapping Henk and Ander for a time during the fight.  Crossbow fire from the adjoining room proved the most troubling, with a metal gate separating the rooms and the sahuagins firing from behind.  After freeing himself from the net, Hank ran over and tried to lift the gate, but a couple poor rolls left him vulnerable to fire while he struggled to open it.  It took them some time, but they were able to defeat the two guard posts.

Most of the rest of this level was empty.  They explored around 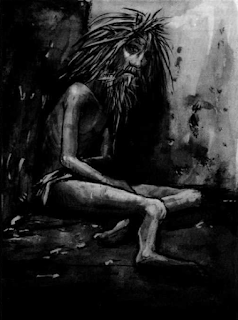 finding most of the rooms in the ending stages of remodeling.  The bullywugs were quite amazed at the changes that had been made.  They came upon the slave chambers, the only one in it an old, nearly dead man named Lemo.  After rousing him and feeding him, Lemo told them he was a wizard that was leading an adventuring party into the sahuagin lair that had been captured.  He told them of a secret room that he had been forced to make that had the party's magic items in it.  He died just after.

Following Lemo's directions, they found the secret room.  On the way, they heard the sounds of mining in the distance.  In the room the found Lemo's spellbooks, a clerical scroll of water breathing, 4 potions of water breathing, a cloak of the manta ray, and a magical mace.

The mace I rolled on the Magic Item Special Features charts on pages 142 and 143 of the DMG.  First time I used them and something I think I'll always be doing for any basic +1, +2 or +3 items.  This mace is dedicated to elemental air, weighing half of a normal mace, and is covered with holy symbols and iconography of Phaulkon, the Suel god of the air, winds, clouds, birds and archery.  These symbols swirl and move around as if stirred by a breeze.  There is more to it, but since my players read this, I'm leaving spoilers out of it.  Needless to say, I love these charts.  Some great hooks are built in for future use from this basic +1 item.

With the cloak, the helm of underwater action that they already had, and the scroll, they will be able to cover all of the non-aquatic members of their group for 24 hours.

Next our group followed the sounds of the mining, coming upon a half completed room with nearly a dozen slaves working under the direction of eight sahuagin, two brandishing whips and the rest kind of hanging out around a stairwell down, with a railing surrounding the stairs.  The noise of the slaves working covered the sounds of the party's approach.  They charged in en masse and quickly cut down the sahuagin, with only one hiccup.  Henk jumped up on the railing to attack the sahuagin sergeant on the stairs.  I had him roll an Athletics check, and he rolled a 1.  Fumble.  I had him roll a d8 and consulted the 1e grenade like missile scatter chart.  He fell straight forward, onto the sahuagin.  The stairs, and the whole lower level, are completely flooded, so no damage from the tumble, but the sahuagin grappled Henk and spun, attempting to pin him.  Luckily, Henk was wearing the helm of underwater action, and was able to muscle his way out of the grasp of the sahuagin as others jumped into the water and finished him off.

Our session ended then, but the boys had decided they want to finish scouting this level before starting the countdown on their water breathing.

Conversion notes are simple on this one.  Only encountered sahuagin, which are in the Monster Manual.  I did cut out a bunch of the magic items in the secret room, though, and changed up the spells in Lemo's spell book to better match with 5e spell lists.
magic items play report Saltmarsh