August 30, 2016
Wow, over two months since my last blog post. Work has seriously taken a turn for the worse, with overtime taking over my free time.

I'll pick back up with another play report. I've gone through some Dragon Magazines recently, but there has been few things to convert for several issues. This is from an older session, so I'll be lacking on some of the details.

In our previous game, the party had tracked down the goblin Iong to Cahill Abbey. Iong had incurred some hefty gambling debts and the group was there to collect the bounty.

Iong spotted our group coming and made a run for it, scrambling out to the ruins outside of town.

For this session I put together two parts from Basic Fantasy Role Playing's Adventure Anthology One. You can download AAO and a bunch of other free adventures on Basic Fantasy's download page.

For the temple ruins, I used ruins from the Shepherds of Pineford. The party had to hack their way through overgrown forest to follow the goblin's trail. Eventually the worked their way through, and found themselves in a clearing, bordered by pillars and crumbling walls. In the center is an altar topped with an obelisk. Around the edged of the clearing were twelve skulls with bloodstones in their mouth. 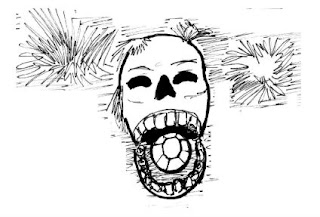 Iong the goblin had stopped running and already picked up a few of the gems, hoping to bribe his way out of capture. Instead of regular skeletons, I thought this was a prime opportunity to use some sapphire skeletons, except with bloodstones. 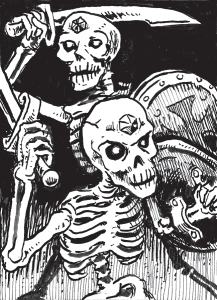 I quickly learned of my mistake. A dozen CR 2 creatures against three 5th level characters is already hard enough. But when those creatures are immune to fire and all of the sorcerer's combat spells are fire-based? A slaughter was in the works. I don't normally change things mid-stream, but this was a fight that the party couldn't avoid. It was sprung on them by Iong picking up the stones. Any chance of fleeing was through difficult terrain. After a couple of rounds I got rid of the regeneration and nudged the fire immunity down to resistance. Still made for a tough fight. By the end, the trio each could count their remaining hit points on one hand.

Like I said, I don't change things once they are in place, but I felt like I was being unfair. If I placed the sapphire skeletons and the party started picking up gems, animating the skeletons, that's something else. That was their choice, but I took player choice out of the equation. That's why I "softened" things a bit.

After the skeletons were destroyed, the ground rumbled. The altar and obelisk cracked and splintered, before falling in a cloud of dust and stone fragments. A dark opening appeared, with stairs leading down.

In the confusion, Tulgasora jumped Iong and captured him. The group, being beaten up pretty badly, decided that discretion was the better part of valor and headed back to Cahill Abbey. They negotiated with Yerris, the leader of the hobgoblin garrison, to hold Iong for several days. They wanted to rest up and return to explore the ruins...

Mini-Review
Adventure Anthology One overall is a good product, especially considering the price of free. Eight short adventures, with a couple different authors. Easy enough to convert to 5e on the fly. The overall quality is up and down, but worth checking out. A good resource to pick and choose bits and pieces from, like I did. The Shepherds of Pineford has two locations, the town of Pineford, and the simple ruins. I may use the town at some other time. Pretty straightforward, but with a few hooks, and a few suggestions on why the party might be there. Perfect for a sandbox game. I was able to to a quick read thru shortly before our session and felt comfortable running it.