October 16, 2016
So work is getting into a somewhat manageable level, for now. With Christmas around the corner, things at UPS tend to get a bit hectic, so I'll try to get some updates in while I can. I'm still behind in posting some play reports. We had a flurry of playing going on a few months ago. Game prep took some time away from the blog as well, as it should be! This blog pretty much is a Downtime Activity for me as a DM.

This session we return to using Basic Fantasy Role Playing's Adventure Anthology One. You can download AAO and a bunch of other free adventures on Basic Fantasy's download page. While they use BFRP rules, they are very easily converted to 5e, and have a nice old-school feel that I like. This time I used the Deathcrypt of Khaldun, by Scott A. Murray. Again we played this awhile ago, so many of the details are fuzzy, but I do remember this as a great session and a nice little adventure.

After the near-TPK of our group during the capture of Iong, they decided to head back to Cahill Abbey to rest and recuperate before exploring the ruins under the old temple. First off they talked to Yerris Lyedenbur, the paladin leader of the hobgoblin troop that has recently been assigned to Cahill Abbey to protect and investigate strange goings on. They arranged for her troop to hold onto Iong while they went to investigate. Guarding prisoners not being a part of their mission, the party agreed to pay the wages of the soldiers that would be guarding Iong until their return.

Long before the Kinslayer War, Khaldun was a sorcerer that tormented the region with disease and hordes of undead using the mystic powers of a magical tome. He was eventually defeated, and driven into the wilderness where he instructed his followers to build him a crypt and to seal themselves inside as his guardians. This was long enough ago that few elven sages are even familiar with the name Khaldun.

Descending under the old abbey's ruins, the smell of death and decay met them. Cobwebs filled the passages, leading to what turned out to be a false crypt. A leering demonic statue regurgitating fetid water from it's mouth into a fountain, and beyond was a sarcophagus. Tulgasora approached the sarcophagus while Ash and Pyric hung back. When he tried to open it, a small horde of zombies and skeletons rose from the corners and the fountain and attacked the party! They made quick work of them, though.

From there they had their choice of two directions to go, and luckily for them, chose the way that lead directly to the true crypt! Using cunning, guile, and some lucky dice rolls, they managed to circumvent some locked doors and avoid some nasty traps. They passed through a few chambers and halls covered with murals depicting Khaldun at the height of his power and glory, giving them some clue to what they may face beyond.

They emerged into a vast crypt, cloaked in black marble. A large square stone block dominted the middle of the chamber, carved with the image of a leering skull. Flickering green torches gave off an eerie light, showing them root covered walls. Alcoves on either side seemed to shake with anticipation. From the sarcophagus on the far side of the room a frail-looking mummy arose, it's red eyes shining in the darkness. In a low gurgle, it said: "Long have I awaited to take my revenge upon the living. I am pleased that the mortal kingdoms have already sent unto me an offering..." 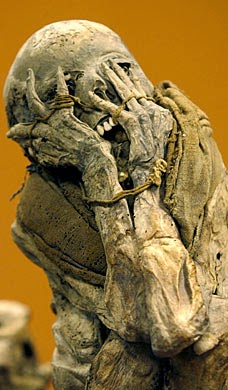 The adventure called for an mummy cleric, but I used an hyperborean mummy. Instead of skeletons, I put in dry bones. The bleak touch ability of the mummy made things tough for Tulgasora, who charged forward, leaving Ash and Pyric to deal with the skeletons.

The combine ability of the skeletons was troubling as well. They assumed that the green torches had something to do with it, and started trying to put them out. I liked that idea. Wasn't something I had originally planned for, but I let it work.

As skeletons started to fall and Tulgasora started landing blows on the mummy, Khaldun's red eyes glowed with rage, and raised his hands. Wisps of purple energy trailed from his fingertips as he spoke words of blasphemy. The sounds of rattling bones and metal sounded from an alcove, and a minotaur skeleton rose up. This pressed the party, but with the dry bones falling, they were able to focus fire on the two bigger opponents. As the killing blow was landed on Khaldun, he fell to his knees and let out a terrible curse as black flames rose from his outstretched arms. The large square in the middle of the room lowered, revealing a black dragon skeleton. A hoarse cackle escapes from Khaldun as he crumbles to ash.

The dice fell well for the party against the dragon skeleton, and they took it down in no time. Battered and bruised they took a short rest. They gathered up some loot, including the undecipherable Book of Khaldun.

Going back to the false crypt, the find the other side thick with webs, and a pair of giant spiders. The only thing I have from my notes from this entire adventure came from this fight. Battling at range, Tulgasora was using thrown hand axes. After a solid hit, Ash cast dissonant whispers, causing the spider to flee. "THAT SPIDER HAS MY AXE!"

They had some luck finding a few secret doors, one which led to some treasure and the other that let them bypass some traps. The second led them to the Sepulcher of Vetula. Vetula was Khaldun's lieutenant in life, and in undeath as well. Now a wight, Vetula wields a serrated axe and a heavy black shield painted with a red skull. "You shall pay for your intrusion with your souls" he says, as he rings a gong with the half of his axe. Two ghostly hellhounds appear. I honestly don't remember this fight at all, except that Tulgasora was about to take a nasty critical from Vetula, but he invoked Shields Shall be Splintered! He now carries Vetula's shield.

I really liked this installment from Adventure Anthology One. In the past, I've run a lot of big dungeons. Back in high I ran a group through Temple of Elemental Evil, slogging all the way to the end. Recently, when I ran our group through Tomb of the Lizard King, I learned to dislike the longer adventures, and that was one of my all time favorites. I've really taken a liking to shorter adventures. At only seven numbered encounter areas, this was a perfect size to finish in a single session.

It uses boxed "read aloud" text. I know that is an area of debate for some people. Here it's used well. It's short and has some evocative writing, some of which I paraphrased above.

I liked how the main battle with Khadun was meant to be built upon. Starting off with Khaldun and the skeletons, then when Khaldun is at half hit points, he raises the minotaur skeleton. As he dies, he releases the dragon.  The read aloud text for this section is great.

Some nice traps and puzzles as well, though my players managed to bypass most of those with hot dice and good choices.

It also leaves things open ended with the description of the Book of Khaldun. "The Book might serve merely as a token of success, a hook for future adventure, or even an artifact around which an entire campaign is based". I like that. I fully believe as a DM you have to put out lots of hooks. The ones that the players bite at are the ones you run with.