December 14, 2016
Working for UPS, I fully expected for the blog to "shut down" for the month, like it often does this time of year. With the overtime that I accumulate this month usually involves me going to work, coming home, and going to bed. Life has a way of throwing unexpected twists your way. One week ago, shortly after punching in to work, I got dizzy and my heart was racing. I had trouble catching my breath. This resulted in an ambulance ride and a couple days in the hospital. The official verdict was a pulmonary embolism with deep vein thrombosis.

For those of you that don't speak doctor, a blood clot had developed in my leg. Part had broken off and moved, blocking the artery to my lungs. Being generally young and in overall good health, I showed none of the warning signs, and overall the cause has my doctors stumped. Now that I'm on blood thinners, they can't run the tests that would determine if this is the result of something genetic. At least until they determine the clot has gone away so that I can go off the medications and let them run the tests.

So it seems like I am now off of work until the end of the year. Instead of piling up the overtime checks, I now await the uncertainty of short term disability checks. The silver lining is that I get to devote extra time to D&D and my blog! Over the summer and early fall we played a lot, so I have a backlog of play reports to catch up on. I'll have to do a bunch from memory, because my laptop died around that time, and I lost some of my digital notes.

This session we played Bowl of Stars, by Vance Atkins. This is Vance's entry to the 2016 One Page Dungeon contest.

This is the first time that I've one a one page dungeon. Overall I really enjoyed it. While this is not a dungeon, it is more of a one page hex. I placed this in as part of a journey. We hit several random wilderness encounters before we got to Bowl of Stars.

When we last left our group, they had cleared out Khaldun's crypt. Wanting to collect the bounty on their goblin prisoner, Striliax, they loaded up their giant lizard mounts and set off for the gray elf capital city of Orod'tal.

Before the Adventure
On to the random encounter portion of our session. After several days of journeying, they set up camp early one day before attempting a river crossing. That evening, they heard sounds of a struggle in the distance. Ash and Tulgasora went off to investigate, while Pyro stayed to guard Striliax. They met up with Asef, a trapper who was out checking his lines. Seems that he had caught a giant weasel, but had already dispatched it by the time Ash and Tulgasora found him. They made friends and shared their fire, while he fed them with his catch. They parted ways in the morning and continued on.

A couple of days later, they were attacked by a pack of death dogs. Surrounded by the pack, Pyro started off with some flashy, fiery spells, killing one death dog. The rest of the pack fled, not liking their chances. Unfortunately, Tulgasora had already fallen victim to a death dog bite, and was poisoned. They needed to get him to a healer!

Since Tulgasora had the smilodon pelt made into helmet / cloak, Ash salvaged the death dog pelt and has since had it made into a cloak for herself, with a head resting on each shoulder.

Overall, I liked the way the random encounter tables worked for me. So far the party has encountered a sabertooth tiger, a giant weasel and death dogs. I also threw in the giant lizard mounts. I really think this helps add to the gonzo feel I was aiming for with Eska. The players are only helping by wearing some of their prizes. This certainly fits in with my head cannon for the setting. I found some great 5e random encounter charts online, but I lost the links in my laptop crash, and have not yet had to look for them again.

Bowl of Stars
Journeying onward, they were closing in on the village of Fel's Thorpe, and the area covered in the Bowl of Stars. Crossing a ridge, they could see the village in the distance, and a bright light streaking across the sky. Seeing meteors streak across the sky is common on Eska, but this one was close. In fact, the party saw this one break apart and impact! One in the fields near Fel's Thorpe, and the other in the woods across the river Ildny. 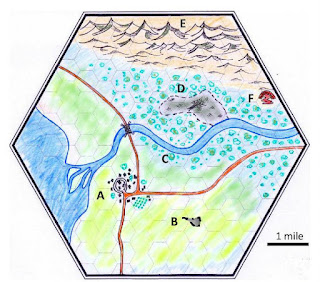 Riding down, they found some farmers already investigating the piece that had crashed. They wanted to take it to Father Fry in the church in town. The party used it mounts to help pull it out of the earth. Luckily for them, not only was Father Fry interested on the glowing meteor fragment, but also possessed a knowledge of healing herbs that was able to help cure Tulgasora after a few days of rest and treatment. During this time, strange things started happening. Father Fry has felt nauseous since investigated the meteor, and has developed painful lumps. Hunters have reported killing strange creatures in the woods, and some foragers have gone missing.

It was during one of these nights while Tulgasora was recuperating, that Ash and Pyro were awakened by noises in the back of the church, where the meteor was stored. The two went to investigate, and stopped a group of cloaked, bronze-scaled kobold that were attempting to steal the bowl shaped meteor fragment! They pleaded that they needed the bowl to hold the star egg, and that Zyvas has given birth to terrible grubs. Confused by the story, the group sets off in the morning, accompanied by the kobolds to meet the kobold's master.

Zyvas turned out to be a young brass dragon, who found the glowing core of the meteor where it struck in the burned out portion of the woods. Dragging the treasure back to it's cave, it rested upon the radioactive fragment as part of it's treasure horde. Doing so has caused the fragment to fuze to it's body and weird mutant "grubs" have since spawned from the dragon's body, and have filled the lair, which the party managed to hack thru. Zyvas is unconscious and can't be woken. The kobolds are quite concerned. They feel that if they can find the two halves of the bowl, they can enclose the "star egg" and Zyvas will recover.

Our heroes agree to help, and the kobolds think that the other bowl has fallen somewhere to the north in the mountains. With some kobolds in tow acting as guides, they head into the mountains. After some exploring, they see some aarakocra circling overhead. A trio land nearby, while others swoop around menacingly. The leader of this group introduces himself as Aial, and demands to know why they have intruded upon their land.

Once they explain they are looking for a piece of the meteorite, Aial looks relieved. It seems that their leader, Salleek, and become infatuated with his "star nest". It's causing him nausea and to loose feathers, but he won't give it up. Our heroes are ready to help get it from Salleek, though the kobolds are not welcome to come along. To keep them occupied, Ash pulled out some of her performing costumes for the kobolds to play "dress up".

Once at the lair, Ash, Pyro and Tulgasora convinced the tribe to throw Salleek a grand party and feast. I forget the exact plan, but using the feast as cover, they stole the "star nest". Not wanting to earn Salleek's (and the aarakocra tribe's enmity) they left a pile of gems in it's place before sneaking out.

Gathering both halves of the outer shell of the meteorite, they returned with the kobolds to Zyvas' lair. After fighting off a new batch of mutant grubs, they enclosed the core back into the shattered halves. After a few days, Zyvas recovered enough to regain consciousness. With the help of the kobolds, Zyvas clears out his treasure hoard, and pulls down the cave, burying the radioactive menace.

Zyvas sets off with his kobold minions to find a new lair. Ash, Pyro, and Tulgasora not only get a reward from the brass dragon, but also several potential new allies. They resumed their journey to Orad'tal.

The Review
The group all really enjoyed the Bowl of Stars. My kids are my players, and at 16, 11, and 11 all still relatively new to D&D. Putting our Age of Worms game on hold and moving to Eska has really helped them blossom as players. I have really wanted to play Eska as a sandbox, and wanted to present something different than an Adventure Path. I've left hooks and hints for them that they've ignored, or not cared about, and others that they bit on. Bowl of Stars they dove right into.

Like I said before, I've never run a one page dungeon. I do like the format. Gives you a basic outline to run with to build upon as you see fit.

For me, the meteor strike fit right into what I imagined happening on Eska. When a meteor strikes, everyone goes out to gather the pieces. This one has a nice twist with it being radioactive and causing trouble. The dragon lair has a nice table to generate random mutant grubs.

This all played out in a single session, so it's a great length. Ample opportunity to fight or negotiate your way thru this adventure.

Overall we had a great session with this.