August 21, 2014
We dip again into the Creature Catalog from Dragon Magazine #89. 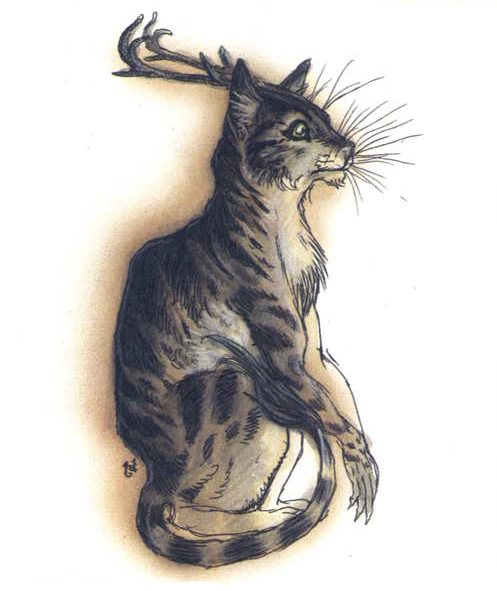 Activate Magic Item. A feystag can activate one magic item per round, as a free action, and can choose from any item within range that it has control of. If a feystag activates an item that can operate continuously for more than one round and does not require concentration to maintain, this item will continue to operate even if the feystag later activates another item or attempts to control another item in subsequent rounds. A feystag must consciously activate the items it controls, as they do not activate automatically.

A feystag can choose exactly how an activated item will function, so long as the same choice is available to anyone able to use the item normally. Effects that are centered on the bearer or that target the bearer (such as winged boots) always effect that individual, not the feystag. For magic items which have effects that must be aimed in a particular direction (such as cones or lines), roll 1d8 to determine the direction. (Forward, right, left, back, and the diagonals in between).

Detect Magic. This power only detects magic items. A feystag sees such magical auras in variations of brightness according to magical strength.

Identify Magic Item. A feystag may study a single magic item within a 60-foot range, as a free action once per round, to determine its magical properties. This ability functions like the identify spell, except that it only takes a single round to gain the full effect.

This creature has a feline head, adorned with a set of frond- branched antlers much like those of a stag. Its coat is dusty brown and its eyes seem to hide an alien intelligence. Though it looks like it can run on all fours, it stands erect on its hind legs.

The feystag, also known to herald as the calygraunt, is a woodland being with an odd mastery over magic. The beast is often whispered of in woodcutters’ tales, in taverns where adventurers and miners gather. The feystag makes its lair only in the deepest woods, caverns, and delvings, where strange magical forces are said to lie.

A feystag is usually a solitary forager (except during mating cycle, when it hunts with its mate). It habitually scouts out new territories, discovering springs, caverns, hiding places, and areas where pitfalls and snares can be set – often a feystag lair is surrounded by traps. The creature hoards magical items, delighted in their use and always trying to acquire more.

A few feystags dwell among humans in remote forest communities. They often bargain with or sell information about items brought to them, or they become sages.

The same creatures that prey on the common deer are also likely to prey on the feystag. Feystags are friendly with korred, centaurs, and satyrs. They prefer to eat plants, particularly mint, certain mosses, and mistletoe.

Feystags are typically 4 feet high at the shoulder, and weigh about 90 pounds.