December 20, 2014
We now move on to Dragon Magazine issue #92, and I'll be pulling from Pages from the Mages by Ed Greenwood, and a collection of spellbooks, and, of course, new spells.

Phase trap is listed as a transmutation spell, but I changed it to abjuration.  Just felt right.  I will also add phase trap to my sorcerer spell list.  Seems to fit with the ectoplasmic spell ability of the incantatrix I posted.

For whatever reason, the thunderlance description is getting weird formatting.  Keeps adding all the extra spaces.  I've tried to fix it, but to no avail. 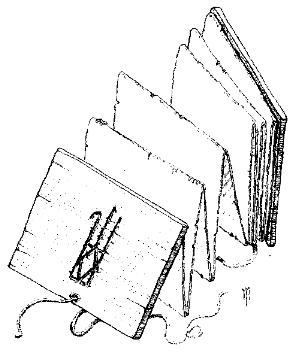 This book is fashioned of a long strip of green hiexel bark, folded and refolded upon itself accordion-fashion. It is bound, protected, between two rectangular pieces of oiled wood held together with hempen cord.  Upon one of the boards is carved a rune, thus:

and by this rune the work can be identified as that of the mage Aubayreer.

Aubayreer was a mage of the Dalelands in the first days of settlement, and later sailed east to what is now Aglarond, where he founded a sorcerous ruling dynasty that continues to this day. The many works Aubayreer made while High Mage of Aglarond, and later Mage-King, are kept securely in the libraries of the palace there, but the original workbook Aubayreer developed as an apprentice to the mages of the Covenant has been lost.


Early in the reign of Lurskas, grandson of Aubayreer, thieves broke into the royal libraries. Several were slain by the guardians and protective magics of the place, and these indeed kept the more powerful tomes safe, but the workbook was stolen. It vanished into the debatable lands east and south of Aglarond, and no definite trace of it has been found since, although reports of the activities of several mages (notably Nuzar of the Seven Curses) have hinted that they have perused Aubayreer’s Workbook, or at least copies of the two spells Aubayreer developed which end the work.


That the book still exists is attested to by the unceasing efforts of the royal house of Aglarond to recover it. The present ruler, the shapeshifting Mage-Queen known as “The Simbul”, is known to have slain the wizard Thanatus and to have ransacked the libraries of the school of magic at Mirrorstar in her attempts to seize the workbook.


Aubayreer’s lone apprentice, the now-dead mage Nytholops, set down in his Chronicles the contents of the workbook, for it was from this book (and no other) that Aubayreer taught him the Art.


There are (or were) 18 faces of folded bark in Aubayreer’s Workbook. The foremost is usually blank; it served as a surface for various protective magics (explosive runes, symbols, and the like) when desired.


This spell affects any one target creature possessing the ability to phase-shift (become astral or ethereal).  If the creature fails a Wisdom saving throw, it is forced into its opposite phase and magically held there for the duration of the spell. An encountered phase spider, for example, that was in phase, physically attacking, at the instant of the caster’s completing the casting of a phase trap, would be forced out of phase, and thereby unable to attack, until the expiration of the spell. If it was out of phase (ethereal) when affected, it would be forced back into phase and be vulnerable to physical attack.

Thunderlance
4th level evocation
Casting Time: 1 action
Range: 300 feet
Components: V, S
Duration: Concentration, until triggered
Casting this spell brings into being a thin shaft of faint grey, shimmering force extending 2 feet from the caster’s pointing finger. This lance is weightless and intangible, but if any creature touches or passes through any part of it, the lance vanishes with a loud clap of thunder, and the creature struck is dealt 6d6 points of thunder damage.

The caster can employ the thunderlance in many ways.  Held steady as a barrier against some creature’s passage or as a tripwire, at ankle height, to stop a pursuer.  It is also highly effective when wielded as a weapon; the caster can move his arm and finger about to strike with the lance. In any combat situation against a thunderlance, potential victims are regarded as having a base armor class of 10 (before any dexterity adjustments); the blow of the lance is transmitted through armor and shields, and the presence of such protection does not benefit the target of a thunderlance attack. However, the bonuses of magic armor and shields are not negated, and will improve a target’s effective AC by the amount of the bonus.

The touch of a thunderlance destroys a shield spell, wall of force, or
minor globe of invulnerability but the lance itself discharges (vanishes, without damaging anyone) upon such contact. Stronger protective spells (such as anti-magic shell) will also cause the lance to discharge, but will themselves withstand the shock of its strike and remain in existence. A lance penetrates fire, water (including ice and snow), and electrical discharges of natural or magical (e.g., wall of fire, wall of ice) origin without discharging, and thus the caster may strike through such phenomena at an enemy.

Anyone wielding a thunderlance cannot be harmed by magic missile spells, regardless of what direction these strike from; their force passes harmlessly through the lance wielder to be absorbed by the lance, increasing the damage it does (by 2-5 hp per missile) when it discharges.  A lance does not confer any protection against other forms of magical attack, nor can it be passed to any other creature without discharging it.

At Higher Levels.  When you cast this spell using a spell slot of 5th level or higher, the thunder damage increases by 1d6 for each slot level above 4th.
abjuration evocation sorcerer spellbooks spells wizard